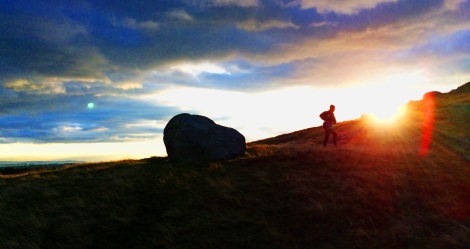 To live somewhere, yet to learn to see it in a totally new light, is something you can’t achieve every weekend. Last Saturday I ran the first edition of the Lakes in a Day Ultra, a 50 mile route with 4000m of ascent, starting in Caldbeck in the northern Lake District and finishing in Cartmel in the south. My itinerant job means I flit between the Cumbria and the Alps, and I’ve been guilty in the past of being swept into the illusion and hype of all ultra’s worth doing being based in the Alps as they are hugely publicised events.

Over the last few years I’ve become increasingly less attracted to the big media circus style events, which in my view have become over commercialised, and have been looking for a great challenge in a lower key event. In the Alps I really enjoyed the TDS event of the UTMB race series, rather than its big brother, as it explored wilder scenery and was a smaller scale race in terms of runner numbers. There was no equivalent in Cumbria, until I signed up for the newly launched Lakes in a Day Ultra (website link). As the day approached, the weather forecast got better and better, and we were lucky to enjoy a stunning Autumn day in the Lakes.

You don’t need a blow by blow account of the race, but the route provided a great mix of running on proper mountain terrain, navigation on fixed routes and open choice sections, and good hill skills including steep ground and river crossings. I’ve already posted my race photos, which you can view by clicking here. The running for me didn’t go too well, as I was tired after a long Alpine season, but I had a real ball. I soon learnt that good navigation needs to come far before the running, and that the route finding is a really good method of taking your mind off the mental challenges that any ultra provides.

In terms of the route, the highlights were running over Blencathra and descending Halls Fell to Threlkeld, and the whole Helvellyn ridge from the north all the way down Fairfield and Ambleside. That’s when the darkness fell, just as I left the Ambleside food station, and I threaded my way over Claife Heights and through Finsthwaite to the finish at Cartmel. I’d always been impressed on events such as the UTMB and Chamonix Marathon, about the quality of the food stations and the support of the volunteers, but rest assured that this came nowhere near the standards I enjoyed last weekend.

The food stations were legendary, with pizza, soup, pasta, soup, cakes, and my favourite; jelly babies! I’m sure I finished the race weighing no less than at the start. I’ve never done a race where the event organisers and volunteers were more friendly, and it made the prospect of each food station even more appealing than usual. A big thanks to the organisers for putting on this event. It hasn’t escaped my attention that the dates for next year are already on the website, and in my diary! I’m not ready to hang up my shoes for the year, as this event really opened my eyes to the pleasures of ‘out of season’ ultras in the Lakes…