A few minutes on the internet, and I came up with three answers about the distance; 38 miles, 40 miles and 42 miles. Looking for the elevation gain produced a similar wide spread of figures. What all the research confirmed, if you can count this as three minutes on Google, was that the race was run on the Saturday closest to the shortest day of the year, and that the previous editions had battled deep snows, torrential rain and floods. And the name of this enigma; the Tour de Helvellyn.

This event turned out to be an ongoing enigma, and a full three weeks after running it, I’m still full of more questions than answers. The organisation is wonderfully low key, yet quietly professional, with no pomp and fanfare. What immediately marked it out was that compared to every other race I’ve run in, was the obvious experience and preparation of all the competitors. For a start everyone was wearing more durable and used kit, than you’ll ever see on a European ultra event. Battered kit breathes knowledge. 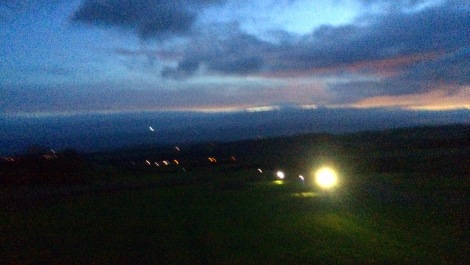 So you’ll see, it didn’t matter that no one knew the exact distance, or the precise height gain of the race. I don’t think it would have been critical for anyone to have added on a few miles or a thousand feet of height gain. Sure there would have been some grumbles, but I’ve never been so sure everyone would pull through. Thinking back to the UTMB in 2011, only half those who started reached the finish. On the Tour de Helvellyn there were only a small handful who didn’t finish, mainly through injury.

This year will be remembered as the Thirlmere detour by the regulars, and for the gale force wind encountered as we ran over Sticks Pass. We were exceptionally lucky not to battle snow or floods, and there was even a brief ray of sunshine near the Swart Beck footbridge. I won’t give you a step by step write up here of the event, as it won’t give you a real impression of what this run is really like. You really need to go out and experience it for yourself.

Some accounts I read described this race variously as gruelling, and a winter epic, but I think these are overly emotional. In their wonderfully understated way, the organisers say it’s a run for the self-reliant, and that sums the race up in a nutshell. I’ll remember the blur of landscapes, some new and some very familiar, and the people who made this race. Some people I knew, and it was a delight to meet old friends who I’d no idea were going to be there, both as runners and volunteers at aid stations.

This interplay of scenery and people really marked this event out from other races, in that all the runners had time for others. Sure there were some incredibly quick runners out there, and the course record was broken, but most people were out to finish. A pre requisite of self-reliance might lead you to think that everyone was running alone, cut off in their own little world, but this couldn’t be further from the truth. People held gates open for others, warned of loose rocks, and chatted while running. 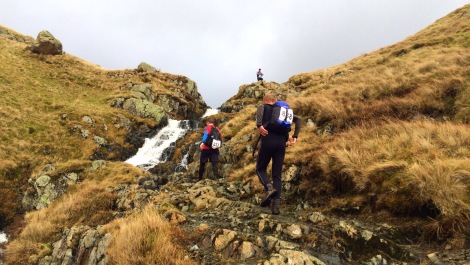 The competition wasn’t against each other, but felt much more of a group spirit of enjoying the day running through the mountains. What made the day so special was the fact that everyone was experienced enough to enjoy the event, and other race organisers should perhaps take note. This was one of the smallest event I’ve ever run in, but the atmosphere during the race was by far the best. It’s not the size, but what you do with it that counts!

A final thing to note, is that at the base of all the race reports I’ve read by others about the Tour de Helvellyn, every single one says “see you next year”, and compliments don’t come any better than that. A massive thanks to Joe, Stu and the volunteers at Nav4 for organising such a great event, and to all the other runners for making the day really enjoyable. See you next year…